This month was extremely busy for me.

Not only because of Danish lessons I am taking for the moment, but mostly because of so many interesting things were happening in Aarhus and around.

Afterwards, in Aarhus, they had festival week (festuge) with hundreds of music concerts and art exhibitions. This year’s topic was “Light”. And walking in Aarhus during evening hours was a real pleasure.

City surprised with big rabbits at the city hall park, an on new library they made light installations.

Also we attended opening of board game cafe. Playing board games is really part of Danish culture, I started to play board games much more here, then I did in Ukraine. It helps to socialize and to meet new people. At cafe there are almost 300 games, and we tried some of them, like “7 wonders”, “Bruges”, “Forbidden desert” and “Tales of the arabian nights”.

Since the games are so expensive in Denmark, it was nice to try them and to decide whether we want to buy them in future or it was too boring game.

I try as well to attend different seminars and international meetings. 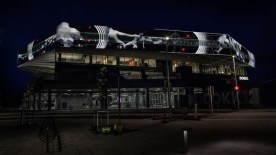 I attended expat meeting by International community, with 600 people attending. Mayor of the city welcomed us and told that city hall tries its best to welcome foreign people, but also it is important to work ourselves for society (most of the Danish people do different volunteer work).

And University International Club organised lectures about Danish language and unwritten rules of Danish culture (like most of the foreigns I knew that Danes are individuals and at the same time they highly trust each other).

Hope you had a nice month yourself!

One thought on “August and September events in Aarhus”