In local cinema “Øst for paradis” I watched amazing movie.

“The man who saved the world” is a story of Stanislav Petrov, who in 1983 didn’t start the Third World War. He was a Soviet officer, who was on his shift, when computer showed several rockets heading from the USA that were going to USSR. He didn’t trust computer and didn’t call to the “tops”. His decision saved our world.

What did he do? 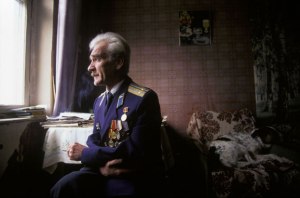 If it wouldn’t be for him, then USSR would send rockets to the USA, in back they would receive atom bombs themselves. The world would become a desert after those bombs.

The Earth would never recover.

I was touched by this movie. It made me think again and again about people, politics, our modern life.

We are so connected! If it wouldn’t be this man,I would never even be born on this planet!

For 10 years nobody knew about Stanislav Petrov. After collapse of the USSR, people discovered about him.

He is invited often to Germany and the USA to give speeches. In Russia he lives alone in a small flat. He lost his wife many years ago.

His forecasts that, unfortunately, people will use the atomic weapon. It can be in the hands of terrorists, and it is just the matter of time.

He asks people to forget about the dark past and to make peace with each other.

Do you agree with him?

What do you think about modern situation in the world?